This is a limited edition vinyl, only 100 copies will be made! 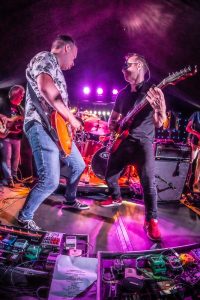 Chris and the band are delighted with the new release as it’s by far the best representation of the skills and musicianship of all the members of the band and, of course, the brilliant guest session by Chris Aldridge from the Climax Blues Band on Saxophone.

The planning of the album started back in November 2018 and the idea was to build on the fantastic success of the third Album “CUT AND RUN” which Charted as No 1 in the UK IBBA Charts and to harness the bands talents together with writing skills of Jim Kirkpatrick and Scott Ralph and also to build and develop on the band sound which was so successful for CUT AND RUN. Jim and Scott started the writing phase in December 2018 and finished around May time of 2019 and by which time had got 10 cracking Tunes at a demo stage. I was clear that the Songs where very strong even at that very early stage and we all couldn’t wait to start the recording phase.

Recording was stated in June 2019 and finished in May 2020, so we have taken our time to try and create the best sounding Album that we can.

The album was recorded at Coal House Studios using the fantastic production and recording skills of Scott Ralph and also the writing, recording and production skills of Jim Kirkpatrick.

Chris says that he is absolutely over the Moon with the final result and its testament to the Musicianship and dedication of the whole Band, who have created an album to be very proud of.

There are no reviews yet.

Be the first to review “Sand & Stone – Vinyl” Cancel reply

Use the search box to find the product you are looking for.

No products in the cart.